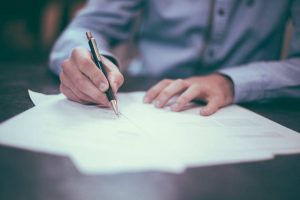 A father and daughter run two companies.  They share ownership but have fallen out.  They are stuck in a group structure and now want to go their separate ways.  The father runs a property investment company and the daughter runs a retail company.  The two companies are both owned by a holding company (‘F D Holdings’) and the father and daughter own 50% of the shares in each of the three companies.  The only assets in F D Holdings are the holdings in the two other companies.

A route often considered to effect demerger is a statutory demerger under the Corporation Tax Act 2010 (‘CTA 2010’).

However, this route is not possible unless the demerger represents the splitting of two trading activities.  The father’s property investment company is likely to be classified as investment and not trading which rules out a statutory demerger.

Another route is a reconstruction under S110 Insolvency Act 1986 with the liquidator splitting out the existing businesses into two new companies and relying on S136 Taxation of Chargeable Gains Act 1992 to treat the distribution of the assets of the two companies as a capital distribution on a no loss no gain basis rather than as an income distribution subject to tax.

However, liquidation can be both disruptive and expensive and there may well be greater stamp duty liabilities.

An alternative if there is to be a reconstruction outside the statutory demerger sections and which does not rely on the liquidation of F D Holdings, is a reduction which will result in the return of capital for the purposes of CTA 2010.

This route is very useful where the company does not have distributable reserves equal to the book value of the assets to be demerged because the demerger may be effected to a shareholder by reducing the capital of the parent and transferring the business to be demerged as a repayment of capital under S641 Companies Act 2006 using the statutory solvency procedure.  To avoid a taxable distribution, the amount of the repayment of capital must be equal to the market value of the business or shares to be transferred.

In our example, a new holdings company can be formed (‘New Holdings’) and placed at the top of the group.

Providing the demerger qualifies as a scheme of reconstruction, it should be possible to avoid the demerger being treated as a disposal by the parent or the shareholders for chargeable gains purposes.  Further, because it is a repayment of capital, it should avoid income tax liability as long as the amount of the capital cancelled or reduced is equal to the market value of the demerged assets.

Transactions of this type are complicated and the circumstances of each particular case are unique and will affect the route to be chosen for the demerger. Professional advice at an early stage is essential.

If you are in a similar situation and you would like to speak with a property investment law professional about the options available to you please visit our website or contact Glyn Evans at PowellsLaw on 01934 637911.