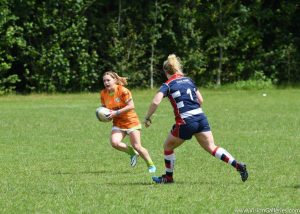 One of our trainee solicitors Stacie has just qualified for the regional finals of the RFU 24/Sevens series with her Bamboos team. With an appearance in the Cup final of the SW7s Festival in Cleve, the Bamboos Women’s team qualified for the next stage after a series of wins in the pool stage over Bristol Ladies and North Petherton, as well as a close victory in the semi-final against Sodbury, were just enough to make it to the final.

The regional finals of the 24/Sevens series will be staged on Saturday 15th of July in Exeter. The tournament is played partly at the famous Sandy Park Stadium, home of Premiership champions Exeter Rugby. In Exeter, the team will go head to head with seven other finalists to determine the best team in the South West region. The winner of the tournament will then progress to the national final on the 29th July at the Rec in Bath.